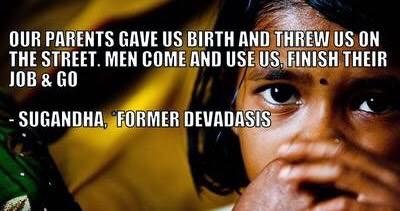 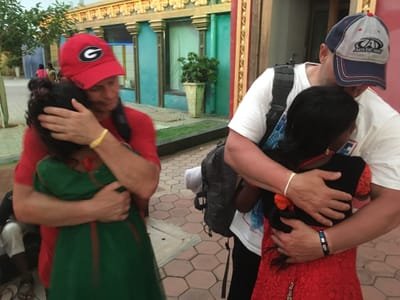 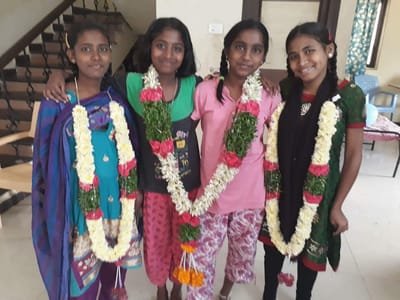 What is a Devadasi? – Young girls are dedicated
or married not to men; but to an idol, deity or object of worship in a temple. Married to God before puberty, the Devadasis or Joginis, many of whom live in the temples, become sexual servants to the villages’ upper-caste men after their first menstrual period. Traditionally girls undergo an 11-day purification ceremony following the onset of menstruation. The “first maturity” ceremony, as they call it in Koppal, marks the transition into womanhood. The Devadasi’s girls are from the lowest caste whose parents have given them to local goddesses or temples as human ‘offerings’. She has to remain unmarried, and maintain herself by ceremonial begging. This system is based on the traditional Hindu belief that evil over the family or the village can be avoided by dedicating a girl in the family to the temple deity. As soon as she reaches puberty, her virginity is auctioned off to the highest bidder. She will become the exclusive concubine of the temple priest in the village. In Karnataka, there is a traditional belief that when there is famine, drought or epidemics, to appease gods and goddesses a lower caste girl is dedicated to the local goddess Huligamma.
These young girls are prostituted for the gods under the banner of the Hindu religion. At the core of this – it is all about money; not religion.  The southern part of India is especially poverty-stricken and the birth of a girl child is taken to be an added responsibility for the families. Most of the parents get rid of this ‘baggage’ when the little girl has not even begun to comprehend what life should be. They are dedicated to one of the many Hindu gods like Yellamma. These young girls will serve or rather sexually satisfy the priests and visitors of the temple, and the Zamindars (local land lords) and other men of money and power, in the village or town. Once a young girl has become pregnant she is discarded by the man who bought her virginity. The children will be social outcasts and rejected. The Devadsi will never marry. She will beg and prostitute herself as a servant of god. The Devadasi life is a horrible existence of despair. Jyothi a Devadasi in Karnataka said "Everyone sleeps with us, but no one marries us. Many embrace us, but no one protects. Every day, my children will ask, Who is my father?’ They do not like having a mother who is in this business. Once, I tried to open a bank account with my son,” Jyothi said. We went to fill in the form, and the manager asked, Father’s name?’ After that, my son was angry. He said I should not have brought him into the world like this. We are sorry we have to do this work. But what is the alternative now? We were given to this life as children by our own families. Who will give us jobs? We are all unable to read or write. And our future, Jyothi said. What have we to look forward to? When we are not beautiful, when our bodies become ugly, then we will be all alone and have no way to support ourselves. If we live long enough to be old and to be ugly. So many are dying. One of our community four have died last week. Two others last the week before. In my village, four younger girls have died. We have no help or hope of ever leaving this horrible place. My 14 year old daughter now has been placed into the temple. We all will die without every knowing what love is or being loved; just used and abused. Death may be better then to continue in this. Who can help us – the gods come to us in our dreams and wipe away our tears; but cannot free us from this.
This practice is illegal but still widely practiced in India. The children born to the Devadasi have no hope for a future. The girls will be sexually exploited in the brothels and the boys will become pimps. We are making a difference in the lives of these children. We currently operate 3 homes for children from this back ground. They are in school getting an education, being reached with the Gospel and growing in a relationship with the Lord Jesus Christ. These precious children now have a hope and a future and will discover what the Lords purpose is for them.